Amazon can already ship to 72% of US population within a day, this map shows

A closer look at Amazon’s delivery network illustrates why the company is now ready to make one-day shipping the default for its Prime members.

Amazon is already capable of offering same-day and next-day delivery to 72% of the total U.S. population, including almost all of the households (95% or more) in 16 of the wealthiest and most populated states and Washington, D.C., according to a report published in March by RBC Capital Markets.

The vast delivery network is the result of significant investments over the past four years, a period during which Amazon built out fulfillment centers across the country, nearly tripling its U.S. logistics infrastructure, RBC said. Amazon has added roughly double the amount of distribution space Home Depot currently owns.

That means the company has a huge head start in fulfilling its plan laid out in its latest earnings report to shorten the current two-day free shipping plan by one day for Prime members, who pay $119 a year for fast delivery as well as services like unlimited music, access to the video catalog and exclusive deals.

“We see Amazon’s 1-day Prime shipping raising consumer expectations and increasing the cost to compete in e-commerce,” Morgan Stanley analysts wrote in a note after the announcement.

The map below from RBC shows the four-year change in Amazon’s distribution footprint. It already covers most of the coastal cities, as well as Texas and major metropolitan areas in the Midwest.

“While store-level distribution is still the fastest way for a consumer to acquire a product, Amazon’s continued rollout of same-day and next-day delivery capabilities continues to reduce that historical competitive barrier and represents a growing risk to retailers who are too often fighting yesterday’s (2-day) delivery wars,” RBC Capital wrote in the note.

Following the Amazon announcement, RBC said in another report that “the faster you ship, the more people buy.”

One of the biggest reasons people shop at a physical store is because of the immediate need to get a product. By shortening delivery time to one day, Amazon changes that equation. Brian Olsavsky, Amazon’s CFO, said on the first-quarter earnings call that the company is already starting to see “good order trends” after rolling out one-day default shipping to certain areas.

It’s having an impact on the stock market, too. Rival retailers, like Walmart and Target, saw their shares drop following Amazon’s announcement. Most retailers are just now starting to offer two-day shipping and will be forced to spend more on improving their logistics infrastructure to try and keep pace with Amazon.

Even at Amazon, the change won’t come cheap. The company said it’s planning to spend $800 million during this quarter alone to expand one-day shipping. RBC noted that 15 U.S. states still don’t have access to Amazon’s same-day or next-day delivery, so the company will have to spend more heavily to reach those areas. 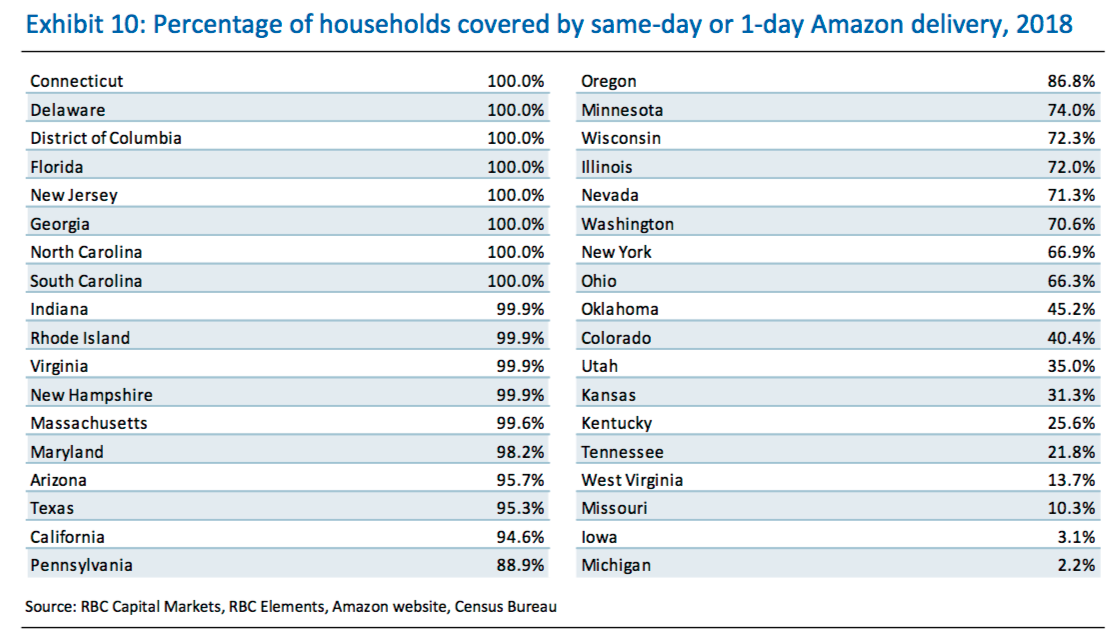 “While this is a drag on profitability near term, we believe enhancements like this should encourage incremental spending by customers and attract new Prime members,” BMO Capital wrote in a note following Amazon’s earnings.

Another benefit is improvements in warehouse efficiency. Since products are shipped faster, more inventory will move in and out of Amazon’s fulfillment centers more quickly.

“The long-term benefit is that turnover will be faster in the warehouse so efficiency can be gained for fulfillment as a percentage of revenues,” Mizuho Securities wrote in a recent note.